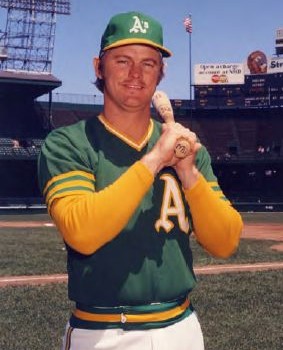 Henry Adrian Garrett Jr. (born January 3, 1943), nicknamed "Pat" and "Smokey", is an American former professional baseball player and coach. A utility man in Major League Baseball, he appeared in 163 total games during eight seasons between 1966 and 1976 for the Atlanta Braves, Chicago Cubs, Oakland Athletics and California Angels. He batted left-handed, threw right-handed, and was listed as 6 feet 3 inches (1.91 m) tall and 185 pounds (84 kg). A younger brother, Wayne, was an MLB third baseman and a member of the 1969 World Series champion New York Mets.

Garrett was born in Brooksville, Florida, and graduated from Sarasota High School. He signed with the Milwaukee Braves in June 1961 and came to the majors during the club's first days in Atlanta in 1966, but he would appear in only four games as a Brave and went hitless in three at bats. He did not return to MLB until September 1970 as a member of the Cubs, going 0-for-3 with three strikeouts as a pinch hitter. He would not get his first MLB hit until his first game with the Athletics in September 1971. Garrett then spent parts of the 1972–1976 seasons in the majors as a pinch hitter, designated hitter, and spare outfielder, catcher and first baseman. He struggled offensively, compiling a .185 batting average, with 51 hits, (including eight doubles and 11 home runs) and 37 runs batted in. However, Garrett later starred for the Hiroshima Carp in Japan, hitting 102 home runs in three seasons. Garrett's 1979 Hiroshima team won the Japan Series against Charlie Manuel and the Kintetsu Buffaloes. In 1976 he established a Venezuela Winter League record by getting a hit in 28 consecutive games as a member of Leones del Caracas.

Garrett began his off-field career in 1982 as a minor-league manager in the Chicago White Sox' farm system. He then became a hitting instructor in the ChiSox' organization, and served for five seasons (1988–1992) at the big-league level as the third-base and hitting coach of the Kansas City Royals. He then moved into the Florida Marlins' organization, spending ten years as a minor league coach. More recently, he was hitting coach for the Louisville Bats, the Triple-A affiliate of the Cincinnati Reds, from 2003–2011. From 2012–2015, Garrett was a part-time batting instructor for Cincinnati during spring training, post-draft mini-camp, instructional league and the regular season.Halls of FameGarrett is a member two Baseball Halls of Fame: the Tacoma (WA) Baseball Hall of Fame and the Appleton (WI) Baseball Hall of Fame.