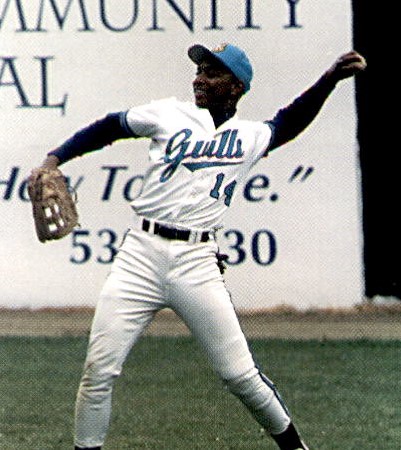 A baseball world traveler, outfielder Corey Paul has played in Mexico, Taiwan, Korea, Japan and the United States in a career that covered parts of three decades. He won back-to-back Triple Crowns in the Japanese minor leagues. Paul was a 16th-round draft pick of the Seattle Mariners in the 1987 amateur draft, taken ahead of Pat Listach, Todd Haney and Jeff Darwin (23rd, 38th and 46th round picks of Seattle respectively). Corey debuted with the 1987 Bellingham Mariners but struggled, only going 13 for 95 with one extra-base hit (a double). He walked 18 times but struck out 51 times, meaning he whiffed in over half of his at-bats. He stole one base in 33 games. Perhaps the brightest element of his season was that he got to share an outfield with Ken Griffey Jr.. After a year off, he returned to Bellingham in 1989 and hit .237/~.373/.318, showing a fine batting eye with 43 walks in 59 games. In 1990, he played for the Salinas Spurs and hit .226/~.346/.330 in 89 games. It was his last season in the affiliated minor leagues. In 1995, with the emergence of the independent leagues, Corey resurfaced with the Grays Harbor Gulls, hitting .297/?/.441. The next season, he batted .326/.395/.453 for the Tri-City Posse. In 1997, Paul was a Western League All-Star OF for the WBL Champion Chico Heat, after a .348/.496/.549 season with 15 steals. He would have ranked 5th in the WL in average had he gotten enough AB to qualify. In 1998, the left-handed outfielder was on his fourth WL team in four years, the Tri-City Posse; he hit .296/.433/.487 with a team-leading 13 home runs. Paul signed with the Taipei Suns for 1999 and hit .360/~.446/.647 in 39 games. During the first week of the newly-formed Taiwan Major League, Corey went 3 for 5 with three homers and seven RBI to tie a league record for most home runs and RBI's in a single game. He would have been third in the Taiwan Major League in average had he played enough to qualify and he helped Taipei to the title. Corey had ten homers before signing with Seibu Lions. Corey was signed by the Seibu Lions in June of 1999 and homered in his first at-bat for them. He hit .257/.318/.475 for the club with 12 HR in 183 AB. Corey was one of the few position players to sign a contract to play in Japan after spending time in Taiwan. Despite his modest performance for a OF-DH, he was clearly the best foreign player they employed that year, as Alan Zinter, Archi Cianfrocco and Greg Blosser were all worse. Paul spent most of 2000 in ni-gun, winning an Eastern League Triple Crown (.353/.459/.737, 21 HR, 69 RBI in 64 G). He batted .242/.333/.411 in 47 games for Seibu that year for a career NPB line of .251/.325/.450. Returning to ni-gun for all of 2001, he won another Triple Crown there with a .352/.458/.657 line, 27 HR and 95 RBI in 92 games. He set the Eastern League home run and RBI records. Sho Nakata broke the home run record in 2009 and tied the RBI mark. Corey's Seibu teammates included Daisuke Matsuzaka, Alex Cabrera, and Hiroyuki Nakajima, Kazuo Matsui, Ming-Chieh Hsu, Reggie Jefferson and Tony Fernandez. He played against Ichiro Suzuki, Tadahito Iguchi, Akinori Iwamura, Kenji Johjima and Tuffy Rhodes. Corey tied the EL home run record in 2001 with 27. In 2002, Paul moved on to the Hyundai Unicorns of the Korea Baseball Organization, hitting .280/.347/.421 with 18 HR and 115 strikeouts in 397 AB. He was one of the better North American hitters in the KBO that year. Returning to Organized Baseball for the first time in 13 years, Corey hit .a composite .327/~.438/.494 for two teams. He batted .355 with 9 homers, 45 RBI and 56 walks (6 intentional bases on balls) in 54 games for the Saltillo Saraperos before his release on June 10. He had batted a blistering .401 in the first half of the season. The Tabasco Olmecas signed him; there, he batted .273 in 28 games. Corey also enjoyed a stint in the Mexican Pacific League in 2003 with the Algodoneros de Guasave and traveled to Venezuela to bat .410 for with the Oriente Caribbeans. His teammates included Detroit's Magglio Ordonez, Jose Silva and Omar Infante.

The veteran moved to the Northern League in 2004 and went 9 for 36 for the Fargo-Moorhead Redhawks before being traded to the Joliet JackHammers for Jason Kinchen and Jon Hooker. With Joliet, Paul hit .298/.407/.456 in 84 games.In 2005, Corey joined the Calgary Vipers, for whom he batted .265/.394/.422 in 29 games to conclude his career. Corey earned Rawlings Player of the Week in 2004 and 2005. [citation needed]In 2011 and 2012, Corey returned to baseball as a hitting coach for the Lamigo Monkeys Baseball Club of the Chinese Professional Baseball League in Taiwan.